For your best understanding to this topic, it is best to refer and relate to  Modelling, Analysis & Design Flowchart before proceeding with this article.

There are two methods to calculate slab loads onto supporting beams :

What is Load Decomposition?

Slabs are not modelled as part of the general building analysis. To do this would require a fully meshed up FE model at every floor level in a multi‐storey 3D model. For realistic structures, such models remain beyond the reasonable capacity of current computer hardware/processors.

Therefore, when you define slabs and loads on slabs, ProtaStructure has to work out what loading should be applied to the supporting beams. By default this is done in a traditional method based on tributary areas. 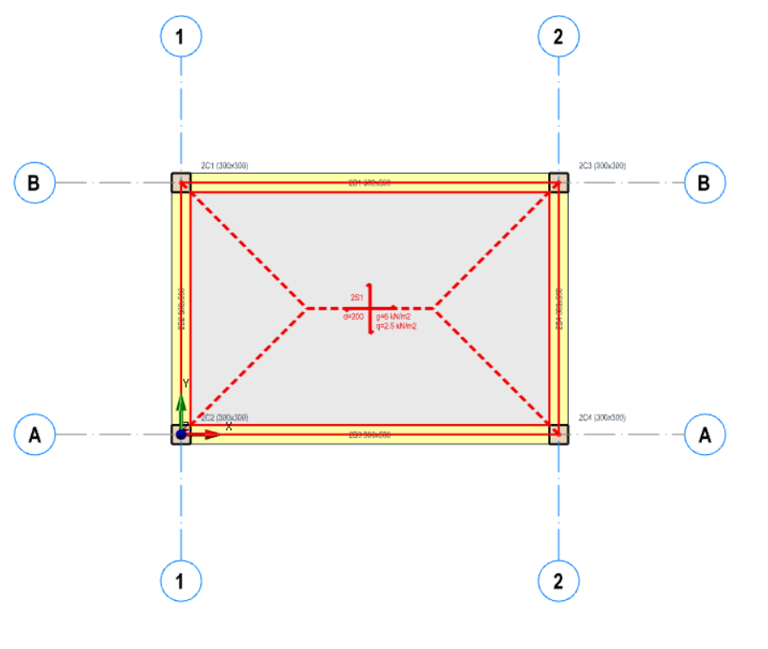 The boundaries of the tributary areas loading each beam can be viewed graphically as shown above. These look similar to potential Yield Lines, hence the name given to this default method.

In this, as in many other areas, ProtaStructure effectively applies the sort of engineering methodology that has been used in hand calculations for many years.

Why switch to an FE method?

Yield Lines method has limitations in circumstances such as:

In such circumstances beam loads are more accurately calculated by using a Finite Elements Model . 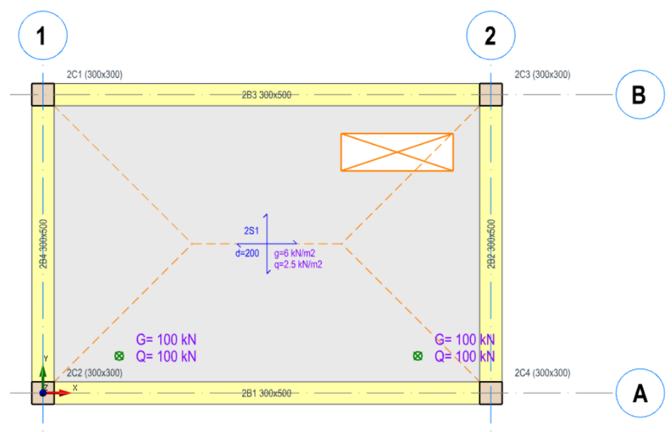 Consider the simple 6 m by 4 m slab shown above. Eccentric concentrated point loads are applied and a large void also has been defined.

The traditional (Yield Line) method of load transfer would ignore the hole, and it would average out the point load by calculating an equivalent UDL to apply over the whole area of the slab. Although the load is not lost, its effect is independent of its proximity to any of the surrounding beams. This is all reasonably apparent when you examine the beam loads. 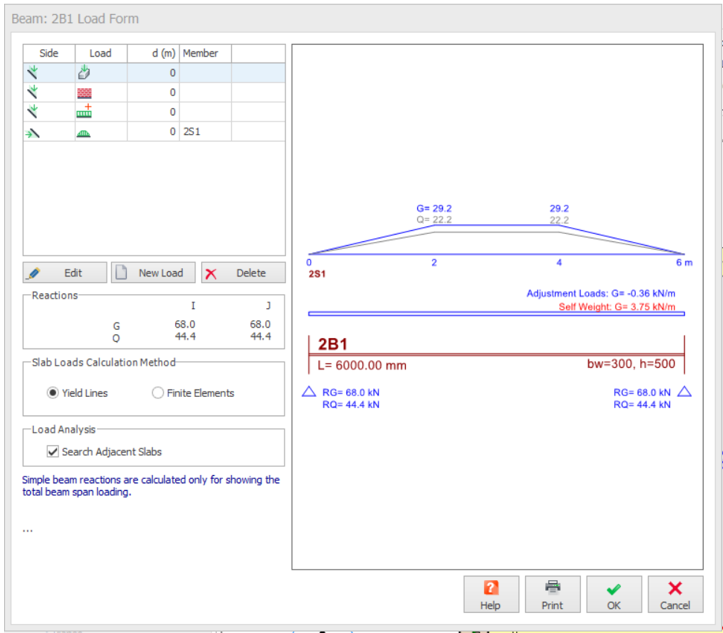 The loading on beam 1B1 is a simple trapezoidal profile where the peak UDL is adjusted to account for the point loads. Based on this method, beam 1B2 sees an identical loading profile. When you run a building analysis, a completely symmetrical set of column loads is determined as shown below. 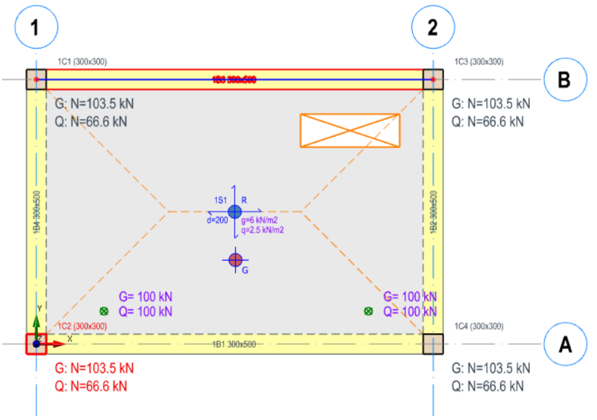 The procedure for generating optional beam loads based on an FE model is as follows:

1.      Select the Load Decomposition by FE command from the Loading menu as shown below. 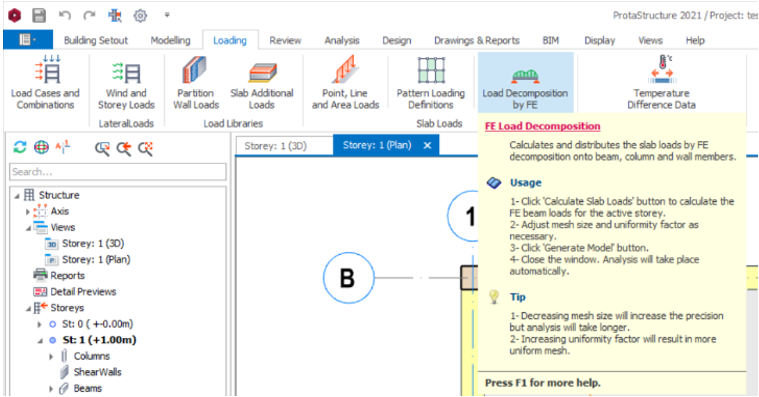 Click on the button  FE Beam Load Decomposition (All Storeys)  to decide which storey to include slab plate in FE model. While button Calculate Slab Loads only mesh slabs for current storey only.

2.      A plate size is suggested by default, however you can adjust the shell element size and the mesh uniformly factor.

It is important to note the advice on mesh density that is given in the above dialog.

3.       Click the OK button and the slab is meshed automatically for the selected storey.

4.        Check for “Pause to Check Meshing at Each Floor” to view at the generated mesh for each floor. 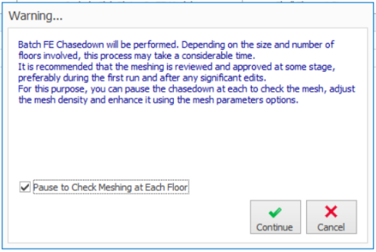 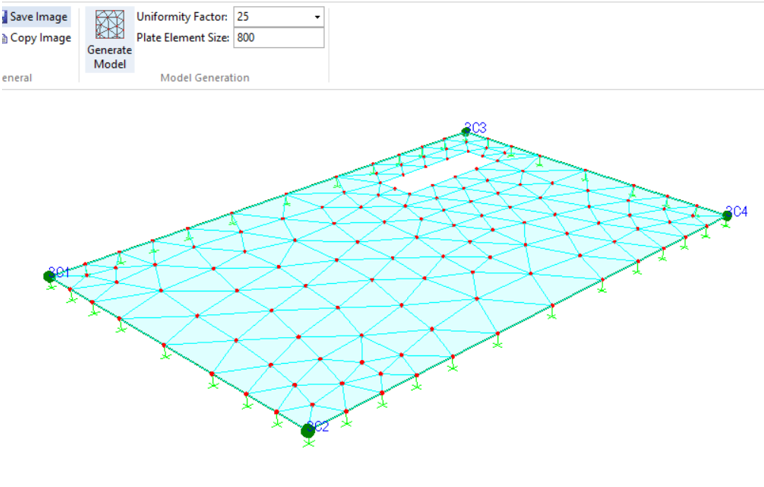 In this case the suggested plate size results in the above mesh being generated, and although not well meshed around the opening this is probably sufficient in this simple example for the intended purpose.


5.      Close this FE Slab Analysis window and then also the Finite Element Floor Analysis. This will result in the following dialog being displayed. 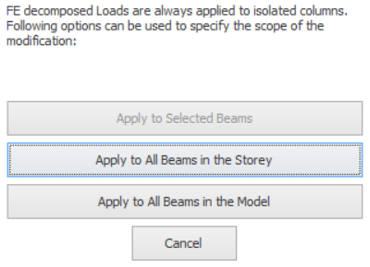 6.       The FE results can be applied to selected beams, all beams in the current storey, or to the whole model. Choose Apply to All Beams in the Model .

Having completed the above process, FE information exists and has been applied to all beams in the model. You can review this on a beam‐by‐beam basis. Select any beam and open the beam loads dialog, it will have swapped to the Finite Elements Slab Load Decomposition Method . The new loading for beam 1B1 is shown below. 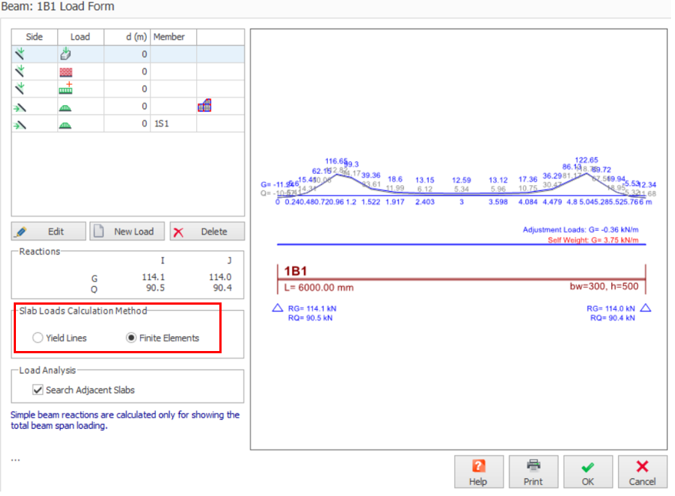 As expected the load intensity is peaking towards the ends where the point loads are applied.

To utilise these new loadings it is necessary to reperform the building analysis. On completion we can see a very different distribution of column loads. 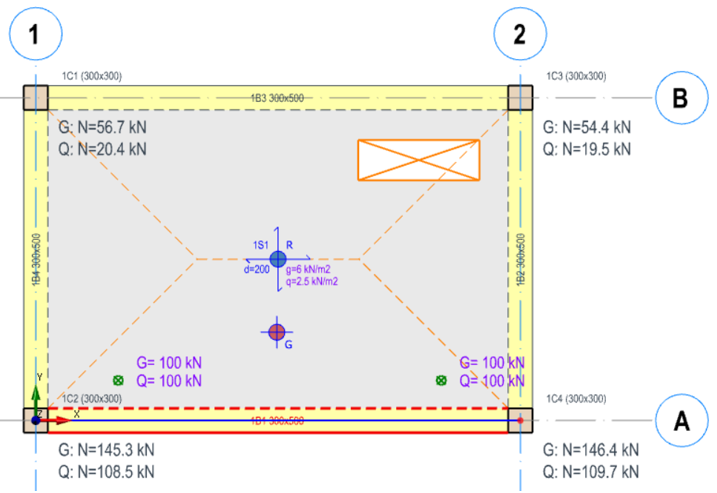 The total Imposed Load using the Yield Line method was approximately 266.4 kN. Using the FE method, it has dropped to 258.1 kN, this is slightly lower because no load is applied to the hole.

If you change any slab loads or beam layouts, you must remember to reperform the Load Decomposition by FE command before reperforming the building analysis.

Axial load comparisons are performed at the end of each analysis. This is a comparison of applied loads vs. analysis reactions. Since you can choose decomposition methods on a beam‐by‐beam basis you can cause this comparison to show discrepancies. In the example above, if you choose finite element decomposition for beam 1B1 only, the comparison will be displayed as shown below. 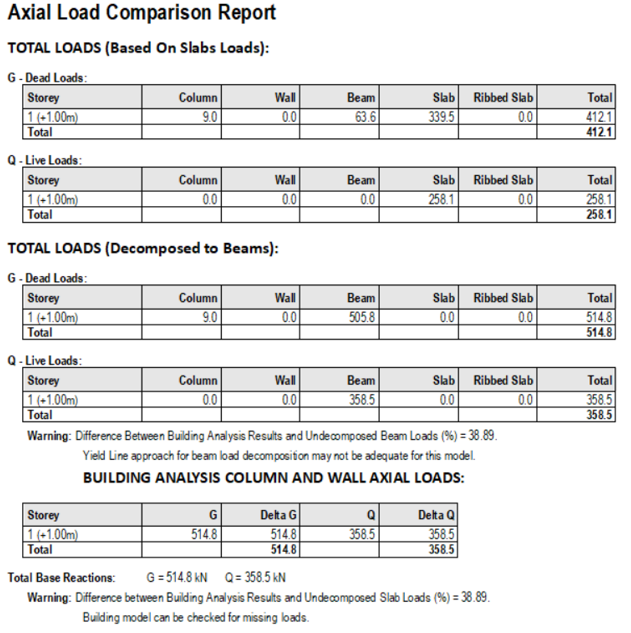 Having reviewed the example above this is a question you might ask. The main point to bear in mind is that the example is unusual/extreme. Concentrated loads and dominant openings are not the norm.


Comparisons of uniformly loaded slabs have shown excellent correlation between the traditional (yield line) and FE methods, so you may find it easier to continue using the traditional method for much of your work.


If you think about the differences the FE method makes, you will be able to decide when it might be more appropriate ‐ clearly the FE method is better if you have to deal with significant holes and/or isolated loading.


Ultimately, neither method is going to suit everybody all the time. For this reason, you can pick and choose on a beam by beam basis if you wish, or you can design all the beams using one method and then check them using the other. When checking you can use the option to select new steel when previous bars are insufficient so that you end up with all beams designed for the worst case from either load decomposition method.

In the FE method beams are replaced by a line of fully fixed supports. As a consequence, in ordinary regular slabs both the yield line and FE method will share loads equally to internal and edge beams. In other words continuity is not being considered. This is a simplification that has long been accepted in hand calculations.

The only way to account for continuity in such a case would be to run an FE chasedown analysis and then merge the resulting beam loads. This method deals with the continuity, a higher load is put on the beam adjacent to the cantilever and correspondingly less load is put on the next internal beam ‐ some engineers may prefer this.

How to switch back to the traditional (yield line) method from FE Load Decomposition method?

If you have already run before the  Load Decomposition by FE  under  Loading  tab, and you wish to change the Slab Load Calculation Method back to Yield Line Method , steps as follows: 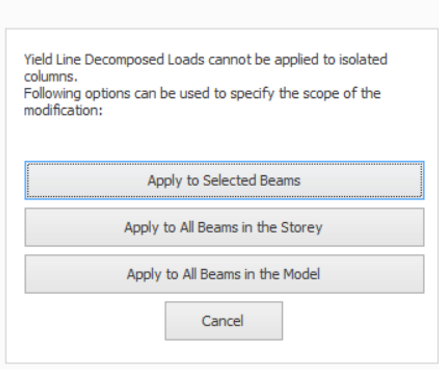 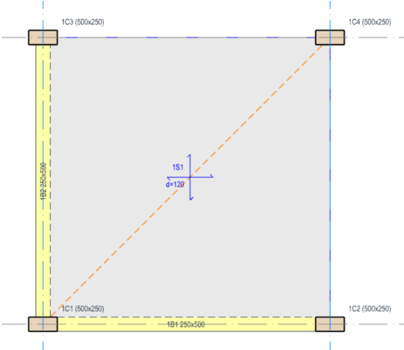 In situation when column is used to support slab without beam, yield line method is not suitable because the slab load will be split & transferred only to the surrounded beam(s).  The column 1C4 above will not receive any loading which this is incorrect.

For beam 1B2, using default yield line decomposition will be wrong. As shown below, this slab load calculation completely ignores the column 1C4. 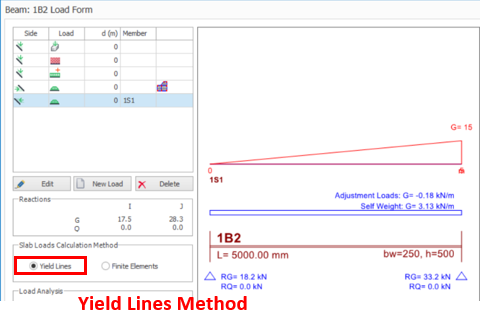 After running FE Load Decomposition & applying to the beam, the slab load calculated on this beam is now reasonable; as there is drop in the slab load at the end, which are being transferred to column 1C4 directly. 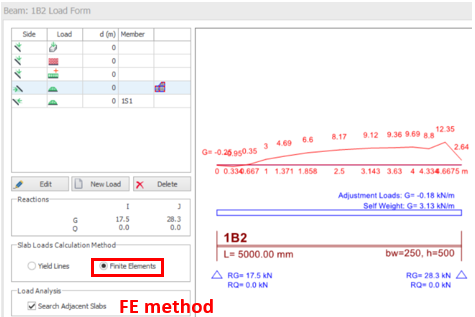 When FE decomposition method is run & applied, the portion of the slab supported directly by the column 1C4 will be calculated & applied  as “FE Nodal Loads”.  This nodal load can be displayed on the plan view by hovering mouse cursor over the column (see left figure below).  The same load will also shown in analytical model (see right figure below). 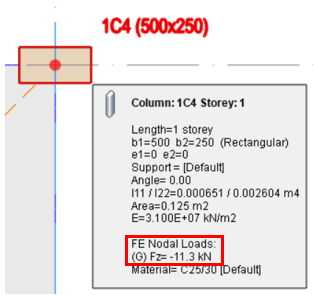 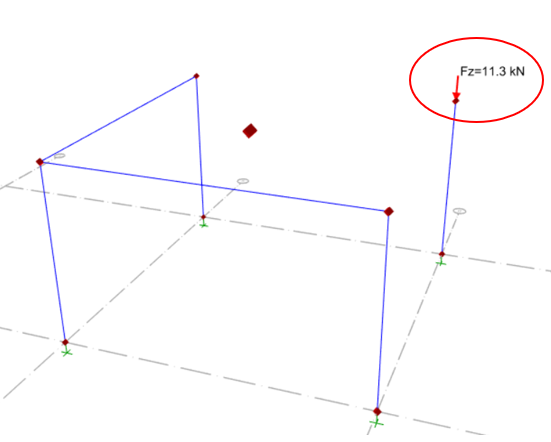 This auto-generated FE Nodal Load is different from the user-defined nodal loads entered using the " Add Nodal Load" function. Hence, this load will not appear in that function's “ Nodal Load” table.

The following steps show the method to generate or update the above-mentioned nodal loads for column supporting slabs :

If you wish to remove this nodal load on column(s) for whatever reason :

2. Pick " Apply to Selected Beam" (based on your preference) > The following message will appear 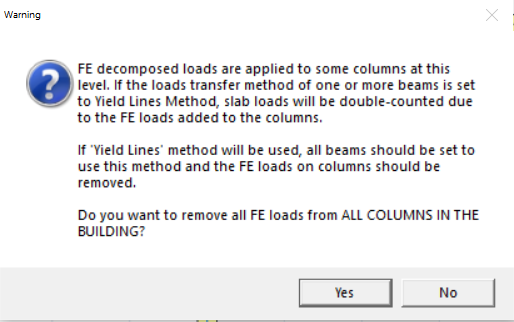